The Italian champions were the visitors as the Hammers opened their new stadium officially and they outclassed the Londoners, who simply must be better in the coming months

Sunday August 7 will forever be remembered among West Ham fans, and yet whenever they come to reflect on the day there will be something of a bittersweet taste.

The day marked the official opening of the intimidatingly palatial London Stadium, née Olympic Stadium, and it is a marvel, an amazing structure that deserves only the very best from its inhabitants.

Of course, the first game came on Thursday – a routine, yet emotional, 3-0 win over Domzale in the Europa League – but this was something more, the club laying on fireworks, dancers and a marching band.

Yet when the real business of the football started West Ham were all over the place. This is yet to become the club’s home stadium, of course, but Juventus – who are building a quite ferocious team – relished their role of party-poopers.

Juve are a team of footballing royalty, and are rarely challenged in Serie A. Even without the intimidating midfield presence of Paul Pogba – reportedly occupied in Manchester – the Italian champions put on a show. Miralem Pjanic has been signed as a replacement for the superb Frenchman, and ran the show from midfield. No Pogba, no problem.

The Hammers, initially shorn of Dimitri Payet, who began the game on the bench yet later returned to a thunderous ovation, threatened first, hitting a post through Enner Valencia, but the Old Lady struck the first blow; a deep Dani Alves cross was headed down by Mario Mandzukic, and Paulo Dybala swept the ball home. And just minutes later it was two, Dybala making a mockery of Winston Reid on the edge of the box and squaring the ball for his Croatian strike partner, who simply could not miss.

West Ham continued their press, however, and Andy Carroll pulled a goal back just after the half-hour mark, bundling the ball home after Gianlugi Buffon made a brilliant save from his initial header.

The England hopeful – with Sam Allardyce in charge he can surely expect to add to his nine caps – added a second just after the restart, rising highest to head home a superb Mark Noble delivery.

But no matter how well West Ham pressed, Juventus’ passing was crisper, their movement smoother than the new owners of this swanky stadium; they deserved their third goal when it came, Simone Zaza slotting home with aplomb after a fine ball forward from Andrea Barzagli.

Of course, pre-season friendlies, as is their nature, are broken up by substitutions and the tempo often dips below that of a Premier League or Champions League encounter, but West Ham need to be better than this. 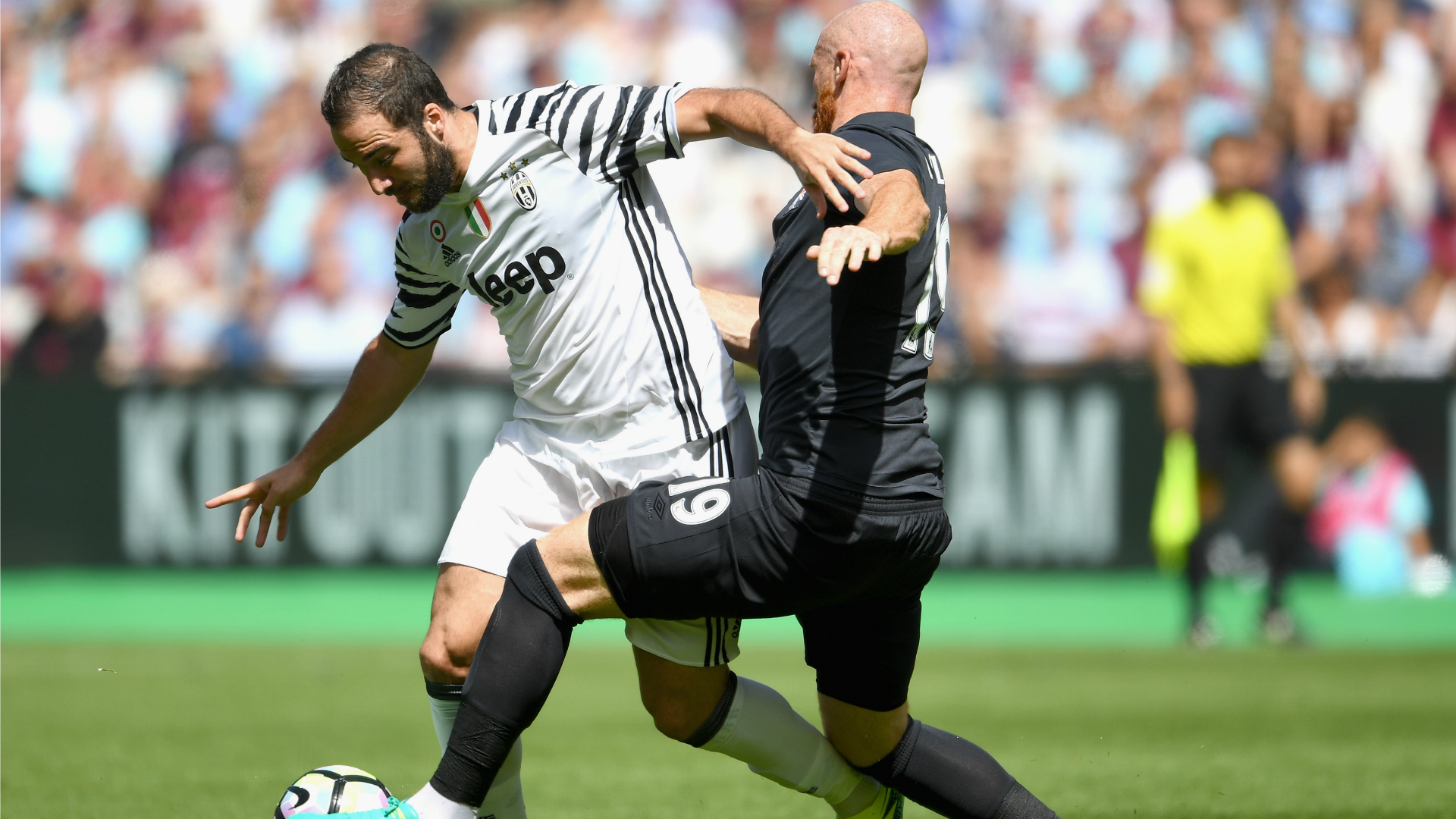 Going forward the Hammers remain an exciting proposition, with the mercurial playmaking skills of Payet, the pace and power on the flanks of Sofiane Feghouli and Enner Valencia and the lurking physicality of Carroll. Defensively, however, there is plenty to be desired. Dybala roundly beat Reid on numerous occasions, as he completely failed to get to grips with the pace of the encounter, while Angelo Ogbonna looked similarly ill at ease with the task he had been assigned. They were not helped by Slaven Bilic’s bizarre decision to deploy Michail Antonio, who remains such an effective winger, as a full-back.

Bilic realised his mistake at half-time and completely restructured his back-four, hooking Ogbonna and Reid and sending on Reece Oxford and James Collins. Antonio instantly added a new dimension to West Ham’s attack, as he moved to the left flank. He must stay there.

Juve may be one of the elite teams in Europe but they have repeatedly struggled against English opposition, their 3-0 win over Chelsea last season ending a four-game winless run against Premier League teams.

West Ham will face similar tests in the Premier League after a summer of outrageous largesse from the biggest sides, with both Manchester clubs, Chelsea, Liverpool and Leicester all strengthening significantly.

Bilic has suggested that he wants five more players before the start of the season and, on this evidence, he may well be right. It would be myopic to suggest that big-money signings equal results, but they surely help, and West Ham must dip further into the market.

A fee has been agreed with Swansea City to sign Andre Ayew, but they need to go further. It is fair to mention that they faced a team with a €90m striker, but they need the personnel to go with the surroundings.

West Ham have a gilded opportunity to become a truly elite club; they have the stadium and they have the resources, but they are yet to build the team. There were flashes of quality on Sunday, but this stadium and these fans deserve more; the club daren’t waste this chance.