Some Nigerian army generals have denied running away from Boko Haram in a new video which has gone viral on social media. 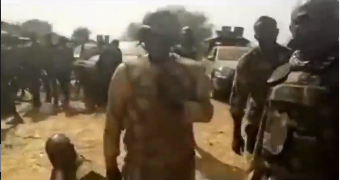 One General Adeniyi who spoke on behalf of other soldiers, disclosed that their morale have been high even though the insurgents have pushed back with so much resistance.

He also disclosed that the Boko Haram terrorists have been fighting with much ammunition than before which includes RPGs. According to the Army General, they were faced with over 15 gun trucks on every flank during a fight against the insurgents.

Here is the video below;