Home > I Was Tricked To Ghana With Juicy Job Offer, Sold Into Prostitution For N150k - 18-Year-Old Edo Girl

I Was Tricked To Ghana With Juicy Job Offer, Sold Into Prostitution For N150k - 18-Year-Old Edo Girl

A young Edo girl who was trafficked into prostitution has spoken about her very sad experiences. 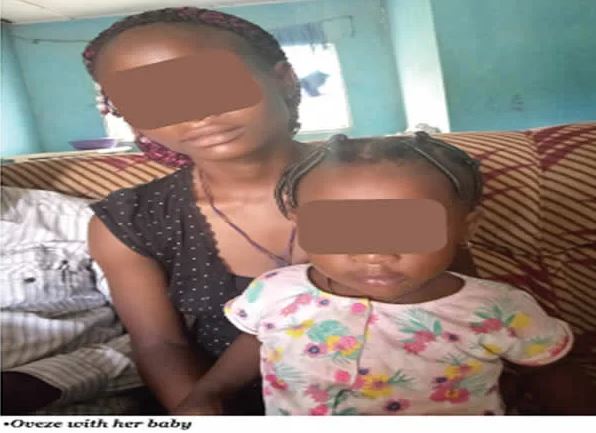 There was a pin-drop silence in the room where only five of us sat; two men and three women. One of the women was her aunt who also doubles as her mother from age three when she lost her biological mother and the second woman is her elder sister who was 11 years old when their mother died.

Her three-year-old daughter strolled into the living room crying. It was her cry that broke the silence, but she was quickly returned to another room where other people around kept her busy to prevent her from disturbing her 18-year-year mother.

All this while, the centre of attraction, Oveze, had yet to speak. Her mood was pensive as she struggled to hold back tears which had welled up in her eyes. She stared into empty space with her chin resting on her two hands as she appeared to be unconscious of her environment.

Suddenly, tears dropped on her palms and that seemed to jolt her to reality. She quickly wiped it away and lifted her head. Finally, she found her voice and in a low tone she began the story of how her close friend and classmate in primary school whom she identified as Bose Monday took her to a woman in Ilesa, Osun State, who allegedly trafficked her to Ghana alongside 100 other girls.

She said the woman promised them they would earn N30, 000 each monthly serving as dishwashers but later sold each of them into slavery for N150, 000.

Prior to the incident, Oveze’s sister, Deborah, said Oveze behaved stubbornly in the house.

She said, “She used to leave the house for three days or a week with her friend, Bose. They were always together. She wouldn’t listen to anybody or obey instructions. She was usually rude.’’

Deborah is the first of the three daughters of her late mother and Oveze is the last child. Saturday PUNCH gathered that her mother fell sick immediately Oveze was born and for three years, she battled with the sickness before she died.

Oveze’s mother gave birth to her amid a pregnancy shrouded in controversy as no one could tell who was responsible except the mother who said she would reveal the man after she gave birth.

“But she couldn’t because immediately my sister was delivered of the baby she became unconscious. She had mental illness and we took her to a home in Lagos for care. It was while she was in the home in Lagos that she got pregnant and we didn’t know who owned the pregnancy. She told us she knew the man responsible for her pregnancy when we asked her and promised to tell us when she was delivered of the baby. Unfortunately, my sister became unconscious immediately after delivery and never recovered until her death about three years later, “ said Mrs Felicia Okomayin, younger sister to Oveze’s mother.

Saturday PUNCH gathered that Oveze lived with Okomayin until her maternal grandmother decided to take her in with her in memory of her late daughter.

Deborah said, “That was the beginning of all her bad habits. My aunt has been a mother to us since my mother’s death but Oveze decided to behave differently.”

Oveze narrated that the story of her unfortunate exploit to Ghana began with a journey to Ilesa, Osun State, from Igarra, Edo State.

She said, “It was one of my friends, Monday, who told me that after leaving Nigeria, we could earn about N30, 000 monthly as dishwashers if we got someone to engage us.

“I agreed and we left Edo State the following day for Ilesa, Osun State. When we got to Ilesa, she took me to a madam who told us that she would take us to Ghana where we would earn N30, 000 monthly as dishwashers in Ghana.

“The day we met the woman, I saw other girls. We were over 100. We went to Ghana by road in a luxury bus. When we got to Ghana, I was handed over to a woman and another person took my friend.

“It was when I got to her house that the woman whom I later identified as Madam Faith asked if I was told what I was there for. I said I wasn’t told then she told me I was there for prostitution. She said men would be sleeping with me for money. She explained that I would pay her one million cedis. When I heard that men would be sleeping with me, I started crying. I told her I wanted to return home. But she told me I couldn’t because she bought me from the woman for N150, 000.

“She told me to rest for that day so I could start work the following day. The following day, she said I should be seducing men to sleep with me. I said I couldn’t do that.

The place was not a hotel but a slum in Ghana. On the third day, I ran away from the house. I did not know where I ran to. I just kept moving away from the neighbourhood.

I met a man who accommodated me and I stayed with him for some days until Madam Faith discovered where I was because the place was not far away.

“She came to pick me from there and handed me over to another woman who took me to Cote D’lvoire. When we got to Cote D’lvoire, the woman told me I would pay her the balance of N1m. I said I cannot pay her because I had no such money. Meanwhile, I was made to work as a prostitute and making a daily contribution. It was the contribution I withdrew and ran back to Ghana. I could have returned to Nigeria but the money was not enough for my transport fare to Nigeria.”

Oveze said when she got to Ghana she saw a man as she was wandering around a ghetto and narrated her ordeal to him. She said the man also took her in with him and started sleeping with her. She added that Madam Faith later saw her with the man and noticed that she was pregnant.

“She attempted to abort the pregnancy for me but the doctor she contacted said he wouldn’t want to abort pregnancy for Nigerian girls and advised her to return me to Nigeria.

“That day, a man known to her wanted to have sex with me and was kissing me. I slapped him and Madam Faith slapped me back and we started fighting. There was a man selling clothes in the area named Mustapha, who asked me what happened later and I explained everything to him. He then promised to take me back to Nigeria the following week. That was how I escaped from Ghana.”

She told our correspondent that Mustapha promised to help her on condition that the transportation fare from Ghana to Nigeria would be refunded to him by Oveze’s family on arrival in Nigeria.

The help rendered by Mustapha nearly became a burden to Oveze’s grandmother as the man stayed with her for weeks awaiting repayment of the fare.

The matter was eventually settled by the District Police Officer of Igarra Police Station who paid over 80 per cent of the money before the Good Samaritan left the grandma’s abode.

According to her, her case is similar to many others the ministry is handling at the moment. She said cases of human trafficking were mostly common in Edo South and Central parts of the state, adding that the state government was passionate about fighting the scourge.

Edeko said, “Since she is from Igarra, the ministry has a skill acquisition centre there. Her rehabilitation will be free of charge and after completing the training, we may be able to empower her. But what is most important now is the psycho-social support for her. Our social workers there can provide that for her because she has gone through trauma. The trauma management for her is also important because we shouldn’t forget that aspect and only focus on the empowerment aspect.’’

Edeko said immediately after the coronavirus lockdown was over, the ministry would take up her case.

Also, the National Agency for the Prohibition of Trafficking in Persons said Oveze’s case was similar to the ones it was handling but would need her support to apprehend the cartel behind her ordeal.

The agency’s Public Relations Officer, Mr Obi Onyebuchi, said the agency desired to take up her case immediately but for the lockdown occasioned by the coronavirus pandemic.

“It’s a good case which we are interested in. But we have to wait till the end of the lockdown before we can do anything on it, “Onyebuchi stated.

The state Attorney General and Commissioner for Justice, Prof. Yinka Omorogbe, also expressed willingness to take up the matter as the chairperson of the state special task force on irregular migration.

She, however, said NAPTIP was the appropriate agency to handle the case.

Omoregbe said, “Unfortunately, we have found that many traffickers come from outside the state to lure out our children. Essentially, once we know about a case like this, the person comes under our protection and we provide different kinds of succour for them.

“Usually, they come under our assistance and we help them with funds to rehabilitate them. I personally meet with them every month and we try to see what more we can do to rehabilitate them. This particular case is however outside our jurisdiction because the lady who trafficked her is in Osun State. I think NAPTIP is the appropriate agency for that although we work closely together. But if she comes around, I will see what we can do.”