Home > May 29: Five Years Of Buhari Is A Waste – Secondus

May 29: Five Years Of Buhari Is A Waste – Secondus

National chairman of the Peoples Democratic Party, PDP, Prince Uche Secondus has described the five years’ administration of President Muhammadu Buhari and the ruling All Progressives Congress, APC, as a waste and a road ought not to be taken. 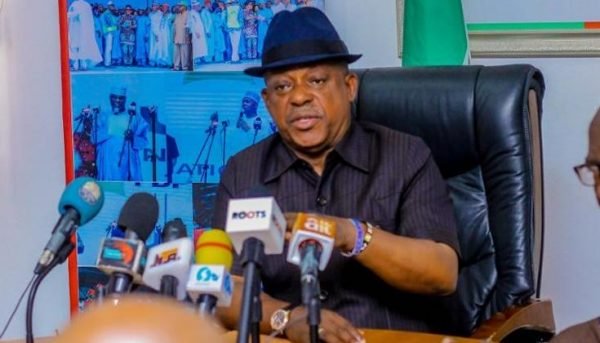 Prince Secondus stated this in a statement made available to journalists on Friday.

Titled “Five years of Buhari- The Road that should not have been followed,” the PDP boss argued that “in the last five years, all negative indexes in our socio-political and economic life as a nation were activated.”

“Today, Friday May 29, 2020, marks the fifth year of the administration of President Muhammadu Buhari and the ruling All Progressives Congress, APC.

“It has been five years of anguish for Nigerians that all negative indexes in our socio-political and economic life as a nation were activated.

“Looking back as a nation at the progress recorded in this country’s democratic journey in 2015 and where we are today, it would be difficult not have a regret.

“All gains after independence, the civil war as well as the era the Peoples Democratic Party, PDP, successfully midwifed the nation’s democratic evolution up to the point of successfully seeing an opposition win and transit into power, have been destroyed.

“This happened at a time small nations like Ghana witnessed astronomic growth in all spheres.

“In 2015, the global international community stood in salute for Nigeria for the great feat recorded in area of democracy but rather than progress from it, the nation under the watch of APC has continued to go in retrogression.

“Our general elections have been anything but fair, with security agencies and the election body abandoning their legitimate responsibilities of neutrality and fairness to being visibly partners of the ruling government,” the statement read in part.