C. Ronaldo Slammed His Coach Jose Mourinho On IG After Mourinho Criticizes Him On Portuguese TV

Cristiano Ronaldo has appeared to hit back at compatriot and former coach Jose Mourinho with a cryptic Instagram post after Mourinho criticized Ronaldo's touch line behavior during the EURO 2016 final.

Ronaldo was stretchered out of the field in the first half due to a knee injury in the match and came out in the final minutes of extra time to bark instructions at his teammates- to inspire them to hold on to their 1-0 lead. But Mourinho , who weeks ago claimed Ronaldo wasn't in his top three players of all time , criticized Ronaldo , saying his touch line antics didn't do his team any favors at all.

'Ronaldo didn't help in any way by doing that in the final few minutes of the Euros final,' the United manager told Portugal's SporTV. There were 11 players on the pitch doing their job, and the person in charge of directing them was the coach.

‘I saw it as an overload of emotion from someone who saw that the team was just minutes away from achieving an objective which everyone wanted.'

‘He lost a little emotional control, not that that's a bad thing, but what my experience tells me is that it is in these moments, when important decisions might need to be made, that the players are lost in their own little worlds.’ 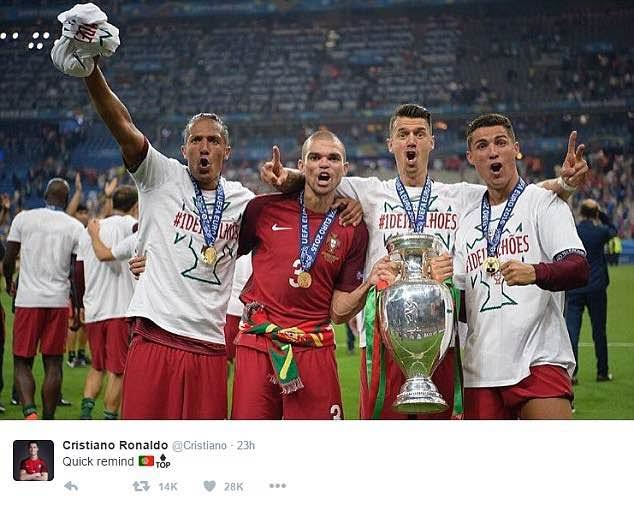 Ronaldo appears to have bit back at his former Real Madrid manager as he took to his Instagram account to post the picture above, which shows him celebrating the European trophy with team-mates Bruno Alves, Pepe and Andre Gomes. He captioned the picture with the words: ‘Quick remind’.