Lord Have Mercy!! Same S£x Marriage Declared Legal In All 50 States Of America

The US Supreme Court today June 26th ruled that same-sex marriages must be recognized in all 50 states of the United States of America. Texas will probably appeal.
From The Washington Post


The Supreme Court on Friday delivered a historic victory for gay rights, ruling 5 to 4 that the Constitution requires that same-sex couples be allowed to marry no matter where they live and that states may no longer reserve the right only for heterosexual couples. 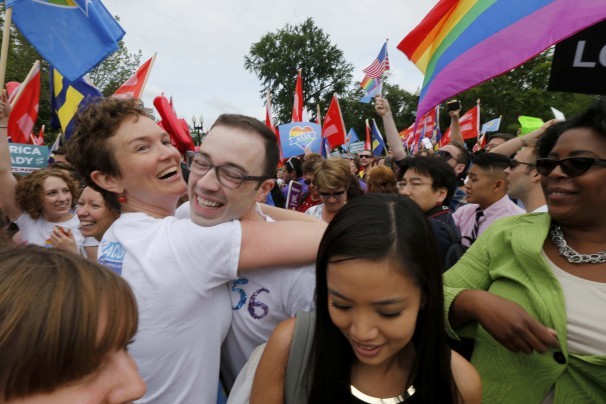 People jubilating after the rulingThe court’s action marks the culmination of an unprecedented upheaval in public opinion and the nation’s jurisprudence. Advocates called it the most pressing civil rights issue of modern times, while critics said the courts had sent the country into uncharted territory by changing the traditional definition of marriage.


“Under the Constitution, same-sex couples seek in marriage the same legal treatment as opposite-sex couples, and it would disparage their choices and diminish their personhood to deny them this right,” Justice Anthony Kennedy wrote in the majority opinion.


He was joined in the ruling by the court’s liberal justices Ruth Bader Ginsburg, Stephen G. Breyer, Sonia Sotomayor and Elena Kagan.


All four of the court’s most conservative members — Chief Justice John G. Roberts Jr. and Justices Antonin Scalia, Clarence Thomas and Samuel A. Alito Jr. — dissented and each wrote a separate opinion, saying the court had usurped a power that belongs to the people.
[ads4]