A Nigerian man was on Thursday, May 12 arrested with RM2mil worth of drugs hidden in seven horse statuettes. The 28-year-old was picked up at about 3pm at an apartment in Taman Prima Tropika, Seri Kembangan by narcotics and Special Tactical Intelligence Narcotics Group officers. 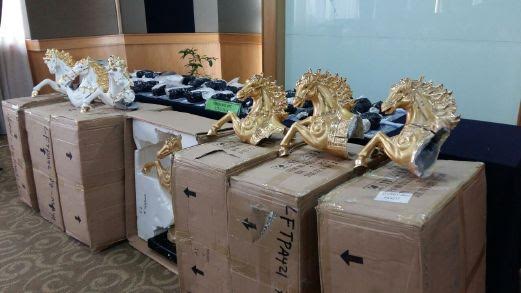 "Following information gathered by our officers, police carried out an operation at the Sria Permai apartment in Bandar Putra Permai about 3pm on Thursday and nabbed a Nigerian man. The suspect, aged 28, was caught while he was unloading boxes containing the horse replicas which, when checked, contained four packets of drugs each inside. Tests conducted confirmed that the drugs were methamphetamine," he told reporters during a press conference at the department's office in Bukit Aman, today.

The drugs were smuggled from China through a shipping cargo services. Comm Mokhtar said the man, who tested negative for drug use and has a valid passport, has been travelling in and out of Malaysia since 2014.

"We believe that he is a member of a Nigerian syndicate that has been bringing in drugs via sea cargo for local consumption and export to Western countries.

"These syndicates have in the past smuggled in drugs stored in water filters, women handbags, ink cartridges and portable air conditioners into the country. If these "horses" had been released to the public, the drugs would have been made accessible to about 600,000 users.

"Don't take the authorities for a ride," warned Comm Mokhta.

The packets of the drug were cemented into the statuettes to avoid detection at immigration and security checkpoints.

The Nigerian man is being remanded for 14 days to facilitate investigation under Section 39B of the Dangerous Drugs Act 1952.

Moktar sad between Jan 1 and May 12, the department arrested a total of 97 Africans who were involved in drug- smuggling activities.