A man believed to be an elderly farmer was just inches away from death after the River Calder in West Yorkshire burst its banks and flooded the streets. Rescuers got to him and tried to take him to higher ground but he refused the leave the red Land Rover he was driving in. 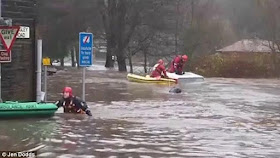 As the level rose to the top of the windscreen rescuers paddled their dinghy close to the car and attempted to get him to open the sunroof but he stuck to his guns and wouldn't budge.

Left with no option, one of the rescuers had to force the sunroof open and manhandled him into their inflatable. A timely intervention because soon after, the car was submerged. Even at that, the man was having none of it, soon as he was on dry land, he asked that someone should go get his car keys. Paramedic Darren James said that the man was taken to hospital with hypothermia, and was cold and shocked when they pulled him from the vehicle.


His Land Rover was left parked in a muddy car park in Mytholmroyd. The sun roof was missing and a shepherds crook could be seen in the back, alongside animal feed bags.